Alaska Traffic Company: Willing to Deliver Just About Anything to the Far Reaches of the North

By Kim Biggar, 3PL Americas, the Magazine of the IWLA in North America, Spring 2012

Picture this: A huge rock mass in the waters off the southern tip of Alaska's Glacier Bay National Park. Atop its 70-foot walls is the Cape Spencer Light, a small, now un-manned lighthouse built in the 1920's to guide ships into Cross Sound and Icy Strait to the city of Juneau. You have to figure that getting supplies to this remote facility is a challenge, not one that many freight forwarders are required to tackle. Sean O'Hare, however, clearly relishes such challenges. O'Hare looks after not only sales for the Alaska Traffic Company, a subsidiary of United Warehouse Company; he also "dreams up solutions" to challenges, the harder the better.

While probably up to 98 percent of Alaska Traffic's business is standard freight forwarding - albeit in a colder environment than most of us are used to - it's the other 2 percent that makes for the good stories. To deliver goods to Cape Spencer, for example, O'Hare leased a landing craft and a helicopter. The freight was lifted off the landing craft in a sling lowered from the hovering helicopter. Workers who followed the goods to the top were ws1tethered to the rock walls to prevent their falling into the sea.

In Alaska, two-thirds of freight is delivered collect, says Tom Herche, president of United Warehouses. For that reason, the consignee is responsible to figure out how goods that arrive in Juneau, Anchorage or Fairbanks, for example, will get to their final destination. A salesperson like O'Hare doesn't simply sell freight-forwarding services; he also works with consignees to determine the logistics of the shipment. Given Alaska's weather and the isolation of many of its villages, creative thinking is a critical part of a good salesperson's skill set.

Another case in point is provided in a job that Alaska Traffic completed in White Mountain, a native village east of Nome. As O'Hare notes, "There is no road to White Mountain, the water is too shallow to get any vessel that can haul freight in, and the airstrip is too short for an aircraft large enough for the freight we had to ship." O'Hare worked with a village corporation - the native council - to devise a plan. The freight, which included a small building and a 20-foot shipping container, was delivered to Golovin, a village south of White Mountain, where it remained until winter. In February, when the river ice was thick enough, fiberglass runners were laid down to allow for the smooth passage of freight-laden sleds, pulled by a bulldozer, across the river. (O'Hare points out that the natives are patient people. "They've been up against the weather for 10,000 years," he says. "They're accustomed to waiting for things.")

Tom Herche took control of United Warehouse in 1974. He inherited his father's minority interest and was able to buy the balance of the company from the other stockholders. At that time, the company had one small warehouse and 12 employees. Thirty-eight years later, the company has six warehouses - five in the Seattle area and one in Portland - about 150 employees and 150 accounts. Its services include third-party logistics, public and contract warehousing, transportation, freight consolidation and cross-docking.

Seven years ago [2005], United bought Alaska Traffic Company to expand into the Alaska market. The company remains keen on expansion; it is looking for opportunities to grow, including in Alaska.

According to Herche, Alaska Traffic was a good acquisition. In addition to being profitable, it provides him with "some of his favorite days of the year." Several times annually, he spends a day with each of the two Alaska Traffic sales people, visiting customers and potential customers to talk about services the company offers. "People in Alaska," he says, "are hardworking, straightforward and nice. It's refreshing to be there." "It's also", he points out, "very beautiful."

In total, Alaska Traffic Company has 14 employees. Nick Lohman is the general manager, based in Seattle, Washington. The company will soon move into a new 60,000-square foot facility there, which will have space for the consolidation of LTL freight to Alaska and for the storage of goods on a third-party warehouse basis.

Up to 95 percent of the shipments leaving Seattle, says Lohman, go by water, on either a barge or steamship. The remaining small percentage of freight travels north by road through Canada.

Three major barge lines in Seattle and two major steamship lines out of Tacoma deliver regularly to Alaska. Alaska Traffic's choice for service depends on customer needs in terms of speed - barges take 10 - 14 days to arrive in Alaska, while steamships make the trip in about 3.5 days through most of the year - and on the shipment itself. LTL shipments usually go by steamship to meet often-tight scheduling requirements; full loads are shipped on either type of vessel. Winter weather affects delivery options, as well. One barge line, for example, that docks in Anchorage from April through October must instead dock in Seward during the winter months. The other two barge lines dock year round in Whittier and in Seward, respectively; cargo is then moved on land to Anchorage and other destinations.

Wintery conditions, between October and April, necessitate the use by Alaska Traffic of heated containers. Snow- and ice-covered though they may be, the containers' contents are protected from the weather. Likewise, when necessary, the company uses refrigerated containers to ship perishable cargo.

Lohman says that the company is "willing to work to meet any needs." And, if you listen for a while to Alaska-based O'Hare, you'll come away convinced that the company can "move anything to any place" in the state. After all, working with native villagers who are motivated by the need to receive their goods, O'Hare has come up with some pretty creative solutions to freight-forwarding challenges.

Another of his stories relates to a shipment to Igiugig, a village north of Bristol Bay. The village is serviced by a shallow, fast-moving river. On one occasion, as the barge was going upriver against the currant, the then-mayor Don Salmon was hampered by the speed of the water from getting the cargo off in his regular fashion, by driving a front loader into the river to scoop off the freight. The barge continued on its route, making deliveries to the villages around Lake Iliamna.

When the barge headed back toward Igiugig, the skipper was able to unload goods for the village on the lake shore rather than having to take a chance on unloading in the river, thanks to work quickly undertaken by Salmon to build a boardwalk road over the wetlands between the lake and the village.

Finding ways to get required goods to people across Alaska, wherever they may be, is part of a day's work for the Alaska Traffic team. While much of their work is basic freight consolidation and forwarding, their most-memorable experiences are gained through the deliveries that test their limits.

Get a quote or contact us today for more information about shipping between Alaska and other points in the United States. 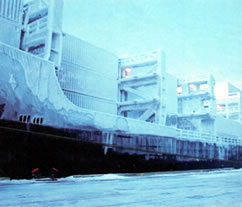 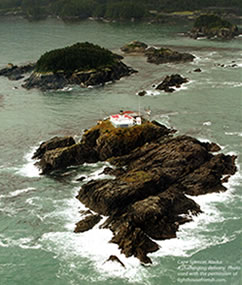